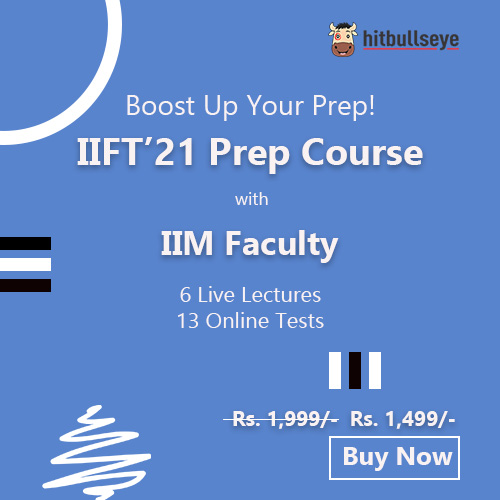 Key Differences Between CAT and IIFT

Expert analysis on the critical differences between CAT and IIFT exam!
Rate Us
Views:10262

"Replace the fear of the unknown with curiosity."

This quote very well sums up the advice we would like give to all MBA aspirants. Dispel the fear of various exams in your minds by asking the right questions. The question that this article will answer in a clear and comprehensive way is one question you all must have thought about many times: What is the difference between CAT and IIFT written test?

Let's look at the major differences between these 2 exams:

The tests have differed mainly in terms of the key physical parameters like the type of sections, the number of questions, and extent of negative marking and of late, the mode of test conduct.

Last year, both the exams had a time duration of 2 hours. The same is expected to follow in 2021.

Negative marking in CAT is -1 for an incorrect answer for MCQ questions (+3 marks are awarded for a correct answer); in the IIFT written test, the penalty for each wrong answer is -1/3 and +3 for each correct answer (in all sections except GK).

Differential marks in each section is another feature of IIFT test; in CAT this happened only in select years like 2004.

The key differentiator in the IIFT test has been General Knowledge & Awareness section. Even though this section has lower weight in comparison to other sections, still it has a say in the final cut-offs. The number of questions from this section generally varies between 20-30 and questions carry 1.5 marks per correct answer and -0.5 marks per each incorrect answer.

The common areas in the two tests are Quantitative Ability, Data Interpretation, Logical Reasoning, Verbal Ability and Reading Comprehension. However, there are no sectional time limits in case of IIFT while it is 40 minutes per section of CAT. Nevertheless, there are sectional cut offs for both the exams.

In terms of preparation, the areas mentioned above generally require similar efforts and approach as compared to CAT. All you need to do is pay some extra attention to paper pattern and important topics for IIFT and adopt some customizations. For example, the Quantitative Ability area of IIFT has consistently seen more questions on Modern Math, with topics like Probability, Permutations & Combinations (P&C), Sets, Functions (including maxima & minima) etc. Unlike CAT, where circles & triangles have been historically critical, IIFT has seen a dominant representation of Trigonometry (both height & distances and trigonometric expressions).

In the recent years, IIFT has been on a bit moderate side while CAT still maintains the high difficulty level. However, you still need to have a proper strategy to ace either exam.