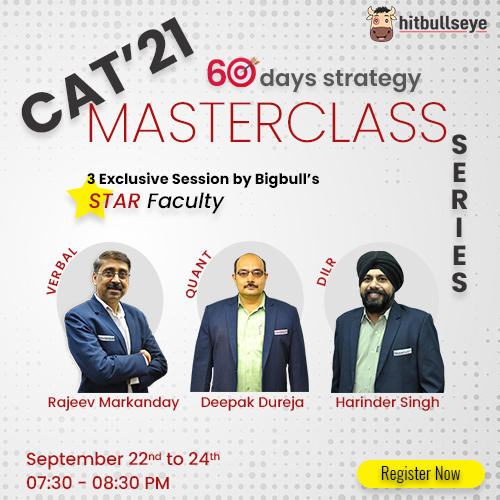 Analytical Reasoning is one of the most important topics when it comes to CAT & other MBA exams. Probing the candidate on his/her reasoning skills, the topic is essentially a test of your temperament. On the one hand, this question type hardly requires you to be in possession of any previous knowledge, and on the other, it requires you to possess an ability to think on your feet. The best way to prepare for Analytical Reasoning is to expose yourself to multifarious question types and make sure you are able to develop an approach for a variety of contexts. Let's explore some more tips and tricks for this topic that will help you gain a competitive edge.

The following is the list of important topics that form the Analytical Reasoning section:
Grab the Unbelievable Offer:
Kick start Your Preparations with FREE access to 25+ Mocks, 75+ Videos & 100+ Sectional/Area wise Tests Sign Up Now

Our expert faculty has compiled an eBook to help you in preparing for the Reasoning Section of CAT 2021. The eBook will soon be available for download. Until then, you can read about some basic tips and tricks to solve the related questions.

Answer the following questions based on the information given below: In a sports event, six teams (A, B, C, D, E and F) are competing against each other. Matches are scheduled in two stages. Each team plays three matches in stage – I and two matches in Stage – II. No team plays against the same team more than once in the event. No ties are permitted in any of the matches. The observations after the completion of Stage – I and Stage – II are as given below:

Q.1 The two teams that defeated the leader of Stage-I are:

Q.2 The only team(s) that won both matches in Stage-II is (are):

Q.3 The teams that won exactly two matches in the event are:

Solution: As per the instructions given for stage – I, we can reach the following conclusions:
(a) As B lost at least one match, hence A won all the 3 matches.
(b) The two teams who lost all the matches cannot be A (as explained above), cannot be B (E lost to B), cannot be D (D won against C & F). Hence, the two teams must be C and F.
(c) F did not play against the top team (i.e. A). We get the following table for stage – I. (To be read from rows)

As per the instructions given for Stage-II, we can reach the following conclusions. (d) A lost both its matches against E and F.

(e) F won against A, hence is the bottom team (out of C & F) which won both the matches ⇒ F won against C as well. This also means that C lost both its matches against B and F.

We get the following table for Stage-II.

Therefore, the answers are:

K, L, M, N, P, Q, R, S, U and W are the only ten members in a department. There is a proposal to form a team from within the members of the department, subject to the following conditions:

The size of a team is defined as the no. of members in the team.

Q.2What would be the size of the largest possible team?

Q.3In how many ways a team can be constituted so that the team includes N?

Sol 1: From the conditions it is very clear that one among P, R, S will definitely be there in the team along with either M or Q. That means two persons are fixed. Now we need one more person as team size should be of 3. Now if L is there then K must be there and thus team can never be of 3 persons with L. Hence, the answer is the first option.

Sol 2: This is simply a hit and trial process. Go on forming largest possible team with the conditions mentioned. You will find maximum size possible is 5 like S, U, W, M, N. The reason for this to be maximum is as S is taken, P and R are rejected. M is taken so Q is rejected. U being there L is rejected, along with that K automatically gets rejected. Hence, the answer is the fourth option.

Sol 3:In this question the condition is that 'N' must be there in the team. Now the size of team is not given that means any size would be appropriate. Thus start forming teams with 'N'.

A person can have at the most 10 books. At least one book of Maths, Quality control, Physics and Fine Arts. For every Maths book more than two Fine Arts books are required. For every Quality control book more than two Physics books are required. Maths, Quality Control, Physics & Fine Arts books carry 4, 3, 2 and 1 points respectively. Find the maximum points that can be earned?

In this case, one can have at the most 10 books; at least one each of all the four subjects. Now it is given that for every Maths book more than two Fine Arts books are required. Here more than two indirectly means at least three as question is talking about books and the required number has to be integral. Thus, if one maths book is there, then minimum three Fine Arts books are required and similarly, if one Quality Control book is there, then at least three Physics books are required. Now if we take one book of Maths, one of Quality Control, three of Physics and three of Fine Arts then we have total of eight books while we can have a maximum of ten books. Now in order to maximize the points our intention is to use all the books. Now the question arises for which subject we should select the two remaining books. Now Maths and Quality Control books cannot be used as then in that case we need to allot certain books for Fine Arts and Physics also and that is not possible so only option left with us to allot the two books with Physics subjects to maximize the points. So, the final configuration would be M-1, QC-1, P-3+2=5, FA–3. Calculating points: (1*4) + (1*3) + (5*2) + (3*1) = 20. Thus, the answer is 20.